This week Wiltshire Police has joined forces across the country taking part in Operation Sceptre.

This operation is a week-long period of activity specifically targeting knife crime. 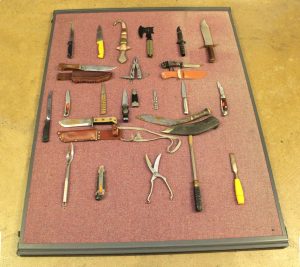 Police activity throughout the week will include weapon sweeps, intelligence led stop and searches as well as proactive operations to tackle those wanted in connection with knife related offences and violent crime.

A significant part of the Wiltshire activity will be providing educational presentations to young people in schools.

The presentation known as FAKE (Firearms and Knife Education) aims to make young people think about the decisions they make and the consequences of their actions that could lead to them embarking on a life of crime.

Superintendent David Minty said: “Whilst it has been found that recorded crimes of possession of weapon offences are falling, our analysis shows that the use of the word ‘knife’ or ‘knives’ in occurrences has increased year on year from 2014 to 2016. There were 577 occurrences in 2016 of which 28% involved those aged 10-17.”

“I would emphasise the majority of young people stay within the law and we are asking schools and parents to ensure that it stays that way. For those who don’t the consequences can be far reaching as a criminal record will affect the rest of someone’s life. It could prevent a person from going to university or college, getting a job or even travelling abroad.”

Carrying a knife is illegal in the UK and the consequences are tough. A person found in possession of a knife – even if it’s not their own – means The Police and Courts will take firm action. Possession of a knife can carry a prison sentence of up to 4 years, even if it isn’t used.
If you have any information about anyone carrying or using knives please contact call 101 or 999 in an emergency.

You can also make a report anonymously by calling Crimestoppers on 0800 555 111.

530,000 meals claimed in Swindon and Wiltshire via Eat Out to Help Out scheme

5 EdTech Features to Use This Term